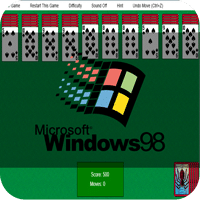 It’s time to get nostalgic and think about the many times we played Spiders Solitaire in Windows. Spider Solitaire was the most popular Windows game, which is not without reason. Still, the game is one of the most sought-after games on the Internet. On this page, you can play Spider Solitaire Windows online, discover all the features, and read about the rules of this nostalgic game. Relive the good old days with a round of free Spider Solitaire online and set a new high score.

How to play Spider Solitaire

How to play Spider Solitaire is a much-asked question on any search engine. After reading the information on this page, you’ll never have to ask that question again since we will tell you how to play Spider Solitaire in detail. You start with 54 cards on the tableau and need to clear those cards with the 50 cards in the Stock. You need to make sequences that start with a King and end with an Ace as the last card to clear the cards from the Tableau. These sequences must be from the same suit and in descending order.

Spider Solitaire Windows has different game features. You can choose between multiple levels. There are three options: easy (1 suit), medium (2 different suits), or complex (4 suits). There is an undo option, but you have the opportunity to receive a hint by clicking on the button with the text “hint.” There is no clock, but you can see the number of moves you made. On top of all these game features, Windows Spider Solitaire allows you to play three different levels: easy. Medium and hard.

The scoring mechanism in Spider Solitaire is easy to follow. You start with 500 points at the beginning of the game. Each move you make will cost you one point. Therefore it’s crucial to finish the game in as few steps as possible. Using the Hint button doesn’t cost you points. However, some players consider this cheating. If you don’t see your next move and need advice, click on that button; it’s free in Spider Solitaire.