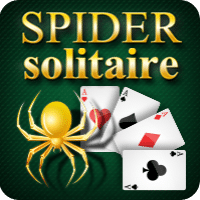 Spider Solitaire is part of the top-3 most popular Solitaire games in the world. The layout of the game consists of 8 long rows corresponding to the 8 long legs of a spider. This is where Spider Solitaire gets its name from. The game is easy to learn. If you stick to the right strategy, you will be able to finish the game more often than not. We have collected information about everything you need to know about the game. We will talk you through the rules, some of the game’s background and provide you with the best strategy and Spider Solitaire tips. Play free Spider Solitaire online on our website.

You can play Spider Solitaire online free on our website. We are proud to offer you a selections of the best online Solitaire games out there. You can start playing immediately, without having to download or register first. All our games are free of in-game advertisements or commercials. Providing you with unlimited game time without interruptions. All you need to do is visit our website and start playing.

Spider Solitaire is played with 2 decks of cards (104 card solitaire) instead of 1 deck (52 card solitaire). If you stick to the right strategy, you should be able to finish about 1 in every 3 games. It’s definitely more difficult than most other Solitaire games but don’t let that stop you. On average it takes about 25 minutes to play a game.

Are you interested in playing Spider Solitaire but you don’t know the rules? Then keep on reading. We will walk you through everything you need to know. Spider Solitaire is a single-player card game that involves a lot of depth and strategy.

The setup contains 8 Foundation piles and a Tableau of 10 rows. The image below shows an example of the setup after the cards have been dealt to start a new game.

Object of the Game

There are 3 versions of Spider Solitaire. You can choose to play either the 1 Suit version, the 2 Suits version, or the 4 Suits version. When you start a new game on our website, you will be shown 3 buttons so you can choose your desired game type.

Spiders Solitaire 1 Suit is considered to be the easiest version of the 3. The game is played with only the cards of 1 suit, the Suit of Spades. You are allowed to move all the cards between the piles. All you have to take into account is the correct ascending order in which you place the cards.

Solitaire 2 Suits is a bit more difficult. The game is played with 2 suits of cards. Most commonly the Suit of Hearts and the Suit of Spades. The reason that it’s more difficult than 1 Suit Solitaire is that you need to build the rows suit by suit in order to be able to move them to the Foundations.

Solitaire 4 Suits is considered to be the most difficult of the Spider Solitaire games. The game is dealt with all 4 suits: the Suit of Hearts, the Suit of Spades, the Suit of Diamonds, and the Suit of Clubs. You need to arrange all rows by numerical order and suit. Only then are you allowed to play the cards to the Foundation.

To play the game you move the cards one by one according to the following rules:

The scoring is calculated based on the number of moves you’ve made and the amount of time you needed to finish the game. Your total score depends on the difficulty, time lapsed, and total number of moves. The higher the difficulty the more bonus points you will receive. When playing Spider Solitaire 1 Suit, you will earn fewer bonus points than when you’re playing Spider Solitaire 4 Suits. The less time and amount of moves you need to finish the game the better.

When you play it right, Spider Solitaire is an easy game to win. By playing according to our strategy, you should be able to win on a regular basis. The best strategy tips to win with Spider are: