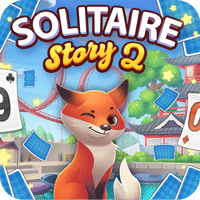 How to play Tripeaks Solitaire Story 2

You only need one click to move a card with Tripeaks Solitaire Story 2. That card will replace the current base card as long as it’s one value higher or lower. Another move is not possible. Clicking on a card is enough; there is no drag and drop function. That makes Tripeaks Solitaire incredibly easy and fast to play. Also, keep in mind that both a King and a two can be on top of an Ace. The suit of the card is not crucial. You can place hearts on hearts or diamonds.

You receive points for each card you didn’t use from the base pile. You can even increase the cards on the bottom by moving multiple cards in a row. The cards will result in extra points at the end of each game. From time to time, special “Boom” cards show up. When you click on such a card, it will remove all cards in a cluster and gives you extra points. The more points you collect, the more stars you will have. You need stars to unlock levels, so it’s always good to try to finish a game with three stars.

The story mode and beautiful design make Tripeaks Solitaire Story a unique game. Thousands of people around the world play this game every day! You can play free Tipreaks Solitaire Story 2 online at the top of this page. It’s completely free, and there is no need to register or watch ads first. Just start the game and have fun! Did you manage to finish all levels? Then Solitaire Tripeaks from Yizhiyuan is a similar game that will not disappoint.