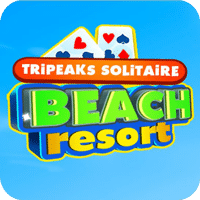 It’s not difficult to find out how to play Tripeaks Solitaire Beach Resort online. The reason is that it plays the same as any other Tripeak Solitaire game. Your goal is to delete all the cards from the deck by placing them on the base stack. To move a card to the pile, it needs to be one point higher or lower than the base card. You get points for each card you move, but you’re also rewarded for making multiple actions in a row and winning without using all base cards.

The only thing you need to know about how to play Tripeaks Solitaire Beach Resort is how you move the cards. There is a base card on the bottom of your screen, and by clicking on a card with one point lower or higher, it will replace that card. You don’t need to alternate colors, and if you cannot make any moves, you can either use a joker or change the base card. If you played all the jokers and are out of undo’s, the game is over. The cards will not reshuffle, so you better make sure you finish the game when you reach the last card.

Tripeaks Solitaire Beach Resort has multiple levels. The moment you finish one level, a new one is waiting for you. From the first second, you have the feeling you’re on the beach. A tropical soundtrack, the sound of the sea, and beach-themed cards will ensure that. In the menu, you will find settings to switch off sounds and music, but there are also instructions on how to play Tripeaks Solitaire Beach Resort online. The main features are the number of levels, the undo button, and the jokers. When you finish a game, a new one is waiting for you.

Your goal with Tripeaks Solitaire Beach Resort is to clear all the cards and get as many points as possible. You will get points for each card you move to the base pile. Besides, a multiplier kicks in when you make multiple moves in a row. Depending on the level, you will also get points for clearing a row or one of the peaks. Your final Tripeaks Solitaire Beach Resort score depends on the number of jokers and undo’s still in play.