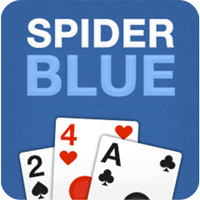 How to play Spider Solitaire Blue

It’s not difficult to find out how to play Spider Solitaire Blue since we will tell you all about it in this paragraph. You can choose between three different levels, but each level has the same basic rules. Each card only fits under a card with one point higher. To clear cards from the Tableau, you need to make sequences from the same suit starting with a King as the highest card and ending with an Ace as the lowest. When all cards are removed, you win. It’s that simple.

The main game features in Spider Solitaire Blue online are the three different levels and the fact that each detail is blue. In the first level, you play with one suit, then there is an option to play with two colors, and the third level allows you to play with all four card types. Other essential game features are the Undo button and the Stockpile, as in any Spider Solitaire game. On the top of your screen, you see a clock keeping track of your time spent on this game. Also, the number of moves and the remaining points are visible.

Spider Solitaire Blue free online is suitable for beginners and experienced players with three different levels of difficulty. You can play this fantastic game free at the top of the page to discover how good a Spider Solitaire player you are. Another great title we recommend is Spider Solitaire Big, also from Gameboss. You can decide which game you play first: both can be played for free and without registering!