Do you love playing solitaire? If so, klondike is the perfect game for you! Here you will learn the Klondike Solitaire Rules This type of solitaire is one of the most popular versions out there, and it’s easy to see why. In klondike solitaire, your goal is to move all of the cards from the tableau to the foundation. In this blog post, we will teach you how to play klondike solitaire like a pro, by explaining the Rules of Klondike Solitaire!

Solitaire is a widely popular game that most people have heard of even if they haven’t played it. The Klondike Solitaire game is probably the most well-known example of the genre. If you’ve never played Klondike Solitaire before, keep reading and we will teach you the rules. This game should be experienced at least once in your life! You may play this card game on your own. There isn’t any need for additional players or a bank. The game is made up of a card deck with no jokers and 52 cards. Consider it like a puzzle using cards that you must solve.

The Klondike Solitaire Rules state you play with one deck of cards. There are seven columns in all, as well as a sorting pile. Only the top card of each column is visible. All the other cards are face down. Klondike Solitaire entails moving all available cards from any position to one of the four foundation in a specified order. The four empty spaces at the top of your display are known as foundation.

The rules of Klondike are as follows

The game of Klondike Solitaire has a simple setup: you have one single pile of cards, in which the faces are down. The stack is placed face-up in the left top corner, with pictures facing down. In the right top corner are four empty slots. There are seven rows of cards; the most-up cards are shown face up at the bottom.

We will explain the different parts of the setup:

Play Solitaire Klondike and how to deal with real cards (offline)

Playing cards is a pastime that dates back to the Middle Ages. The game was quite popular until about 1900, when it began to fall out of favor in the United States and Great Britain, but today many people prefer playing games like Solaire Klondike online because they are more convenient. It is, of course, feasible to play Solitaire Klondike with a physical deck of cards as well. If you want to use real cards while playing Solitaire Klondike, follow these instructions on how to deal with them.

Klondike is played with 1 decks of 52 cards, without the jokers. so take the jokers out first

Deal seven cards face down in a row from left to right. The second column is then dealt, skirting the first column. When you deal the third column, you leap over the first two columns. You continue this pattern until you finish dealing all of the columns. If you did it correctly, each column will ascend from left to right, with the initial card being 1 and the final 7 cards being 7 cards out of 78 total possible combinations.

Step 3 – Open the top card of each column

Open the cards from left to right so there are 7 cards faced-up.

Keep the remaining cards faced down so you don’t know what cards are in the pile.

Solitaire Rules: Value and order of the cards

Klondike Solitaire is a solitaire variation in which the jokers have been removed from a standard deck of cards. The suit symbols are Hearts, Diamonds, Clubs, and Spades, with each suit having its own symbol: red Hearts and Diamonds, black Clubs and Spades. The picture below shows the order of a Suit.

A Suit is made up of a series of cards that can travel in both directions, beginning with the highest value and ending with the lowest. Each number’s rank is determined by the amount of pips on it. Jack, Queen, King, and Spade are the face cards. A spade may represent either 1 or 11 depending on its suit.

Solitaire Rules regarding the Game Play

When you move cards to the Tableau or from row to row (on the Tableau), cards must be placed in the following order.

When you move cards to the Foundation, cards must be placed in the following order:

This version is pretty straightforward. Each time you make use of the Stockpile, you take 1 card from the pile. You turn this card face open to put the card into play.

Traditionally, to win by the Klondike Solitaire rules, you must finish the game entirely. All of the cards must be moved to the Foundation. You win if you succeed. If you don’t, you lose. It’s as simple as that. Many distinct extensions have been developed in order to make the game more difficult and increase its appeal on the internet.

Multiple improvements have been implemented to keep the game fresh and exciting. These enhancements include, for example, a clock and scoring. You may challenge yourself even more by utilizing these functions. You can compete to achieve your personal best or strive for your best score. To make our Klondike Solitaire game more engaging, we’ve included these two features.

The scoring in our rules of the Klondike Solitaire game is based on the Microsoft Windows scoring system. You earn (or possibly lose) a number of points each time you move a card. The following are the steps involved:

The timer keeps track of how long it took you to complete the game. It has no impact on your score. However, if you achieve the same high score twice, the time with the fastest time will be recorded.

How is Klondike different from solitaire?

Klondike is the same as solitaire but solitaire is not always Klondike. Solitaire is a collective name for card games you can play on your own. Klondike refers to the town Klondike in the days of the gold rush. Here is where the card game finds it origin.

How to setup the cards for Klondike solitaire?

For the setup of Klondike solitaire you first shuffle a deck of 52 cards. Deal out one row of seven cards. Only the first cards is dealt open. Six cards remain closed. Deal out a second row of six on top, skipping the first open card. Start with the second column. Deal the first card open. Repeat this until there are 28 cards on the table. One card on the first column and seven cards on the last. 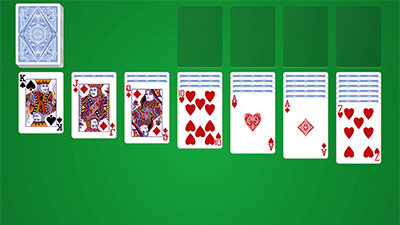 Do you flip 1 or 3 cards with Klondike?