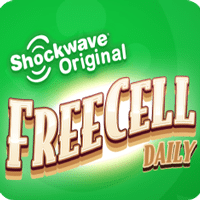 The Shockwave Freecell Solitaire rules are simple and similar to other rules. There is no countdown, so you have all the time to finish your game of Freecell Solitaire Shockwave . However, a scoring mechanism allows you to set a high score. An undo button can help you correct your mistakes. You can use that button as many times as you need, but the number of moves will not change. You win when you have 13 cards from each suit on the dedicated foundation cell!.

How to play Freecell Solitaire Shockwave

It’s not too difficult to find out how to play Solitaire. The goal is simple; find a way to get all cards from the tableau to the four foundation cells. There is no timer, and there are unlimited undo’s. For each card in the foundation, you get points. You receive bonus points for finishing the game within ten minutes. Freecell Solitaire offers three different levels going from easy to hard. The easy level shows all 52 cards simultaneously, while the “hard” level only shows each third card.

Like many other Freecell games, you may move the cards in two ways with this Freecell Solitaire Shockwave version. You can double-click on a card to move it to the best possible position. That can be under a card in the table, a foundation cell, or a free cell. It’s important to remember that cards in the tableau must be one point lower and from another color than the card above them. The cards in the foundation must be from the same suit and always increase +1.

Freecell Solitaire has multiple features. There are settings such as enabling/disabling sounds and music, but more significant is that there are three different levels. When you’re playing the easy mode, you will see all 52 cards from the beginning. The second level is medium, and then you see every second card. The third level is hard, which only shows you each third card. All other cards are then closed.

There is no timer with this Freecell Solitaire game, but you get bonus points for finishing the game as quickly as possible. For each card on the foundation, you also get points. The more complicated your level, the more points you get.

You’ve read all the rules and game features, meaning there is only one thing left to do! Will you play an easy, medium, or hard level of Freecell solitaire free? Pick your level and start playing directly on the top of this page. Want to play another online Freecell Solitaire game? Perhaps Freecell Solitaire Windows or maybe Freecell Christmas is an excellent pick for you!