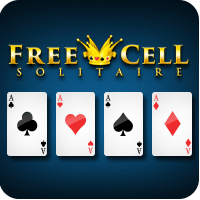 How to play Freecell Solitaire Code This Lab

Freecell Solitaire is a fun game with a basic setup. The game begins when you click on the start button. There is no “undo” button. You can start a new play by clicking on the circled arrow button. Other options and game features that you have with this Freecell Solitaire game are enabling/disabling background music and playing in full-screen mode.