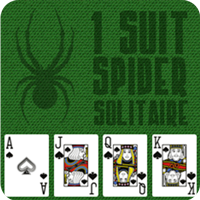 How to play 1 Suit Spider Solitaire

1 Suit Spider Solitaire is a game that you will learn to play in no time. There aren’t many game features, but that doesn’t mean the game isn’t interesting. The game stays exciting with the scoring mechanism. You start with 500 points, and each move you make will cost you a point. On the other hand, if you clear a whole row of cards, you receive 100 bonus points. With the Hint button, you get a tip about your next possible action. The Undo button reverses your last move. Other features you’ll find in the settings menu with options such as resetting a game or enabling/disabling the sound.